The three leaders vying for control over the Kingdom of Denethak have gathered their supporters, splitting the region apart. The major settlements of the region have each backed one of the leaders. 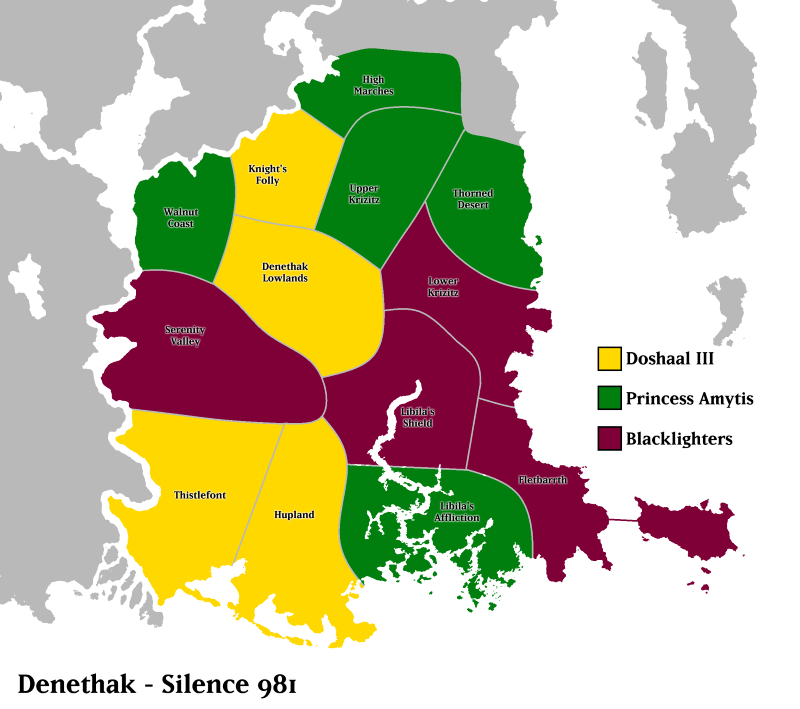 Doshaal III has had great difficulty recruiting local supporters, but regardless his army has crossed over from Senuthesia and is ready to assault key positions. His first obstacle will be ensuring the supply lines to Senuthesia's garrisons in the centre are re-secured, because at present they have been cut off by blacklighters. Amytis does not have an army she can rely on, but has a scattering of supporters across the region. As she will be relying on them for supplies, she needs to make sure they're not captured from her. A difficult task, considering just how spread out they are. The Blacklighters, surprisingly, weren't even able to secure the region containing their bone altar. Taking control of that region will be their main priority. All involved feel the need to make an attack to secure their position before anyone else can exploit their moment of temporary weakness. In this situation, a war is inevitable. So far, Gallonia and Norothi have not backed any side in the conflict. However, for the sake of further destabilizing any potential enemy, they might later decide to prop up the weaker side to keep the war going. Back to lore archive