Fighting in Denethak continues, although thankfully for the inhabitants in the region in a limited scale. The armies of Amytis marched on Knight's Folly and quickly routed the vastly outnumbered army of Doshaal III. In turn, Doshaal III's forces rode into Serenity Valley practically unopposed by the Blacklighters. 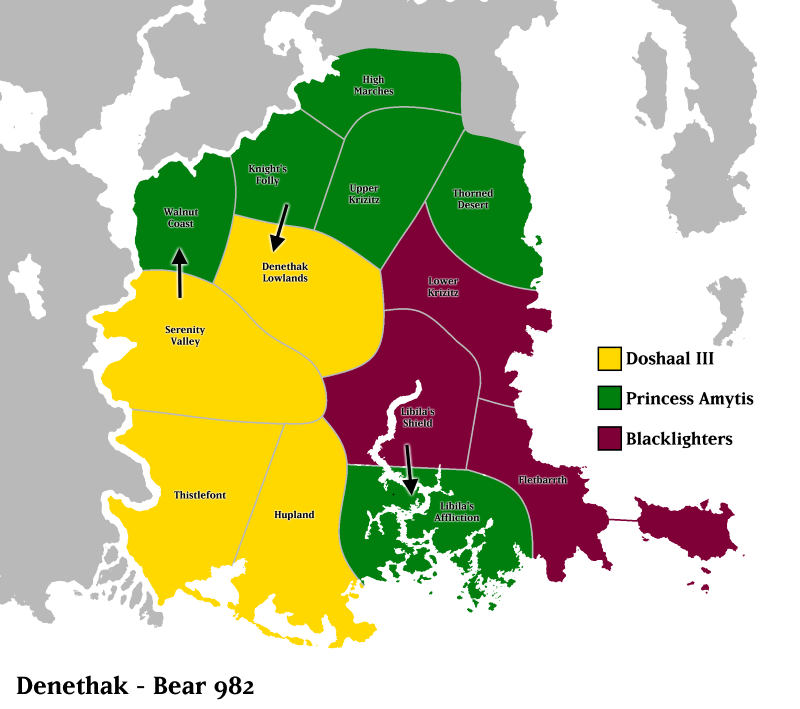 More attacks are expected to be launched in the coming months. So far, thankfully for the citizens of Denethak, no major battles have broken out and skirmishes have been limited to rural regions.

Under Senuthesian rule, the settlements of Denethak mostly relied on sea and river travel for integration within the kingdom. However, the march of armies have prompted a resurgence of road building in the kingdom. Already, roads stretch from Walnut Bay to Serenity, and across to the Libila's Shield region. A major obstacle to road building remains in construction of bridges. Lack of skilled engineers and tools mean that the river crossing points for the roads still need to be forded by carts and wagons, delaying both army movement and, in the future, possible overland trade.

The Alveron Guild of Commerce had, for decades, planned market festivals across Alveron for the purpose of trade in regional goods. This practice stalled a few years ago due to internal turmoil in the guild. However, they're now looking to resume the practice. The Guild has stated that they are looking for officials who can secure and manage market locations, as they currently do not have the manpower to do so themselves. It is unclear whether the Guild will be able to hold any markets within the Denethak region due to the ongoing war. Back to lore archive