Doshaal has reliquished all claim on Denethak as part of a surrender of his forces in Denethak. Doshaal's armies, who have lost repeatedly in clashes with Amytis, begun suffering from morale problems over the past few months. This morale problem recently turned into desertion and, seemingly fearing a total rout of his entire military, Doshaal has decided to cut his losses and pull out of Amytis. An agreement between envoys of Doshaal and Amytis has already been reached to allow them space to cross over from the regions of Denethak they still hold, back to Senuthesia. Thistlefont and Hupland will soon be transferred from Senuthesian control to Amytis. Although seemingly an orderly retreat, it remains to be seen how Doshaal III will maintain the loyalty of the Senuthesian nobility who rallied behind him to attempt to maintain the Dual Monarchy. The regions along the shore of Eastern Senuthesia, who relied on and funded the cities on the opposite bank in Denethak, will be particularly furious over this outcome. 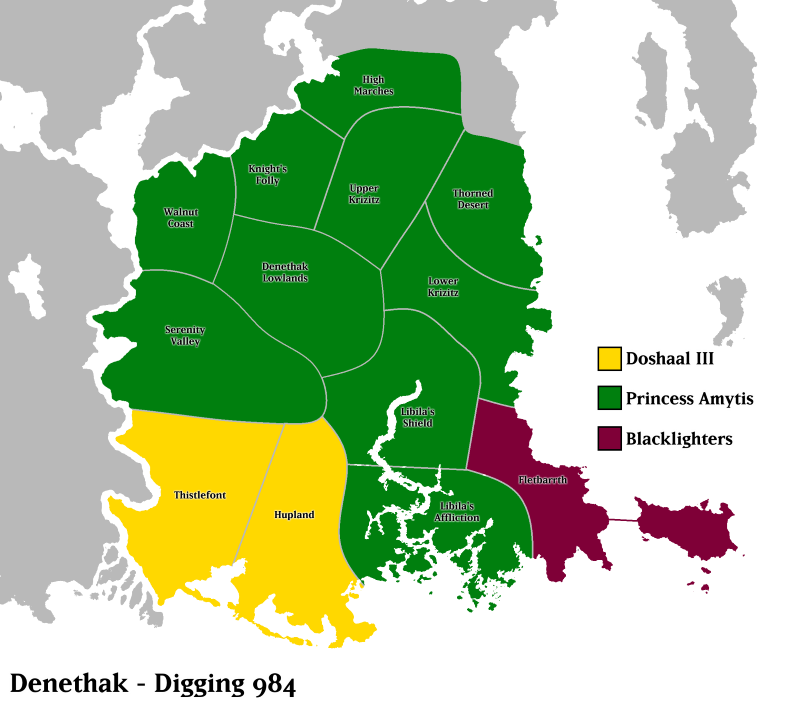 The forces of Libila, similarly suffering a string of crushing defeats, have been all but swept from the mainland. While they have not made any formal surrender, and likely never will, they are effectively defeated. Their presence has been reduced to the sparcely populated islands of the Fletbarrth region. Amytis does not have the supplies needed for mounting a naval invasion to entirely eliminate the Blacklighter forces, but it's likely that within a few years a naval assault will be mounted to take the island.

Princess Amytis made a range of promises to entice supporters to her side, and rewards for them should she take the Denethak throne. Regional autonomy. Autonomy for cities. Limits on her power. Further, many of her supporters only supported Amytis as a means to remove Senuthesian power from Denethak, and have no loyalty to her. Even worse, many who nominally supported her will now actively oppose her. Her status as part of the Do-Senuth Family, while the initial source of her claim on Denethak, will now serve to be a weakness. Amytis may have won the war, but it's unclear how she will maintain her victory. The coallition she assembled for winning the war appears impossible to hold together in it's aftermath. She has the crown, for now, but if she fulfils all her promises of autonomy for her allies, that crown will be left with very little power. Back to lore archive